The following HTTP servers were observed:

However, there are some interesting differences in the results as well. The screenshots below, which show the graphical output of the slowhttptest tool, demonstrate how connection state changed during the tests, and illustrate how the various Web servers handle slow http attacks.

Apache is generally the most vulnerable, and denial of service can be achieved with 355 connections on the system tested. Apache documentation indicates a 300-second timeout for connections, but my testing indicates this is not enforced. 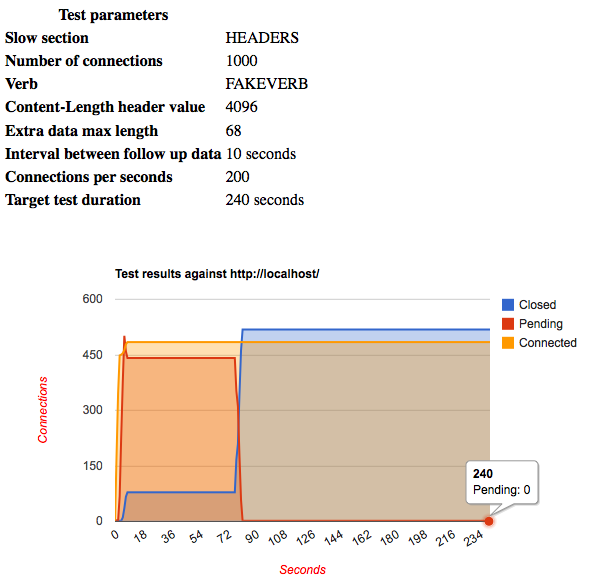 The rest of the connections were accepted and backlogged. The limit for backlog is set by the ListenBackLog directive and is 512 in default httpd.conf, but is often limited to a smaller number by operating system, 128 in case of Mac OS X. The 483 connected connections shown in the graph correspond to the 355 being processed plus the 128 in the backlog.

One interesting side note: The Apache documentation says that ListenBackLog is the “maximum length of the queue of pending connections”, but a simple test shows that backlogged connections are being accepted, e.g. server sends SYN-ACK back, and backlogged connections are ready for write operations on the client side, which is not a normal behavior for pending connections. Apache documentation is probably using “pending” to mean the internal connection state in Apache, but I rather expect “pending” to refer to the state in the TCP stack, where “pending” means “waiting to be accepted”.

I terminated the test after 240 seconds, but the picture would be the same for a longer test.  A properly configured client can keep connections open for hours, until the limit for headers count or length is met. With such settings, DoS is achieved with N+1 connections, where N is number specified by MaxClients.

While testing, I noticed that my httpd.conf had a TimeOut directive set to 300, and Apache 2.0 documentation says that:

The TimeOut directive currently defines the amount of time Apache will wait for three things:

I understand from the above paragraph that the opened connections should be closed after the TimeOut interval, i.e. 300 seconds in the default configuration. However, I observed that the connection is closed only if there is no data arriving for 300 seconds, which means this is not an effective preventative measure against DoS. This behavior also indicates that if there are some rules defined to throttle down too many connections with a similar pattern in a shorter period of time, they are also ineffective:  An attacker can initiate connections with very low connection rate and get the same results, as the connection can be prolonged virtually forever.

nginx is also vulnerable to slow http attacks, but it offers more controls than Apache. 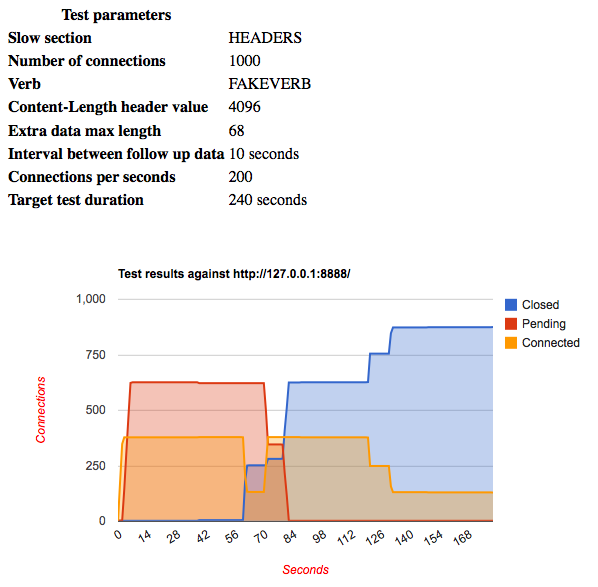 As shown in the graph above, the server accepts the connections it can accept, and leaves the rest of the connections pending. Due to some hardcoded timeout values, connections are closed after 70 seconds no matter how slow the data is arriving.  Nginx is therefore safer than default Apache, but it still gives attacker a chance to achieve DoS for 70 seconds.

In any case, a client can always re-establish connections every 65 seconds to keep the server under DoS conditions.

Lighttpd with default configuration is vulnerable to both http attacks, which are fairly easy to carry out. 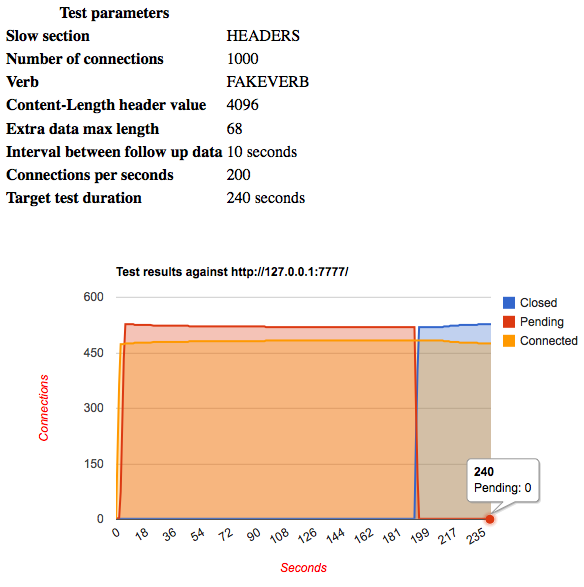 The default configuration allows a maximum of 480 connections to be accepted, as can be seen in the graph above, with the rest pending for 200 seconds, and then closed by a timeout. Lighttpd has a useful attribute called server.max-read-idle with default value 60, which closes a connection if no data is received before the timeout interval, but sending something to the socket every 59 seconds would reset it, allowing the attacker to keep connections open for a long time.

The lighttpd forums indicate that a fixed issue protects against slow HTTP request handling, it only fixes a waste of memory issue, and hitting the limit of concurrently processing connections is still pretty easy.

IIS 7 offers good protection against slow headers, but this protection does not extend to slow message bodies. Because IIS is architected differently from the other Web servers tested, the behavior it displays is also different. 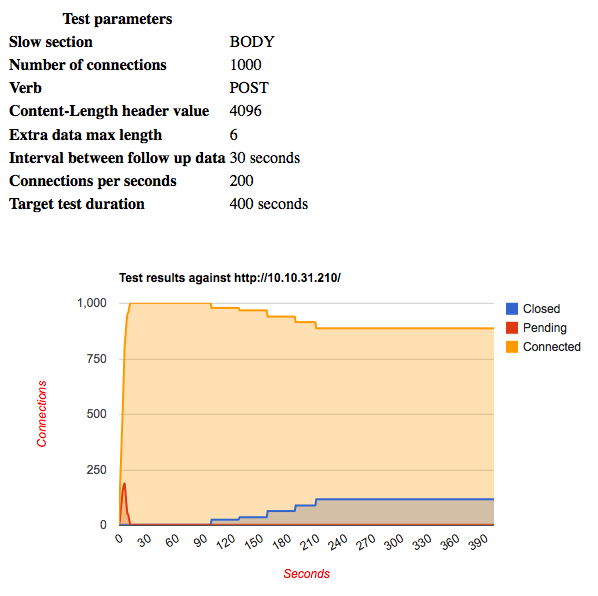 IIS 7 accepts all connections, but does not consider them writeable until headers sections are received in full. Such connections require fewer resources from IIS, and therefore IIS can maintain a relatively larger pool of these connections. In the default configuration, it is not possible to exhaust the pool with a single slowhttptest run, which is limited to 1024 connections on systems I tested on.  However, it would be possible to launch multiple instances of slowhttptest to get around this limitation.

Software configuration is all about tradeoffs, and it is normal to sacrifice one aspect for another. We see from the test results above that all default configuration files of the Web servers tested are sacrificing protection against slow HTTP DoS attacks in exchange for better handling of connections that are legitimately slow.

Because a lot of people are not aware of slow http attacks, they will tend to trust the default configuration files distributed with the Web servers. It would be great if the vendors creating distribution packages for Web servers would pay attention to handling and minimizing the impact of slow attacks, as much as the Web servers’ configuration allows it. Meanwhile, if you are running a Web server, be careful and always test your setup before relying on it for production use.