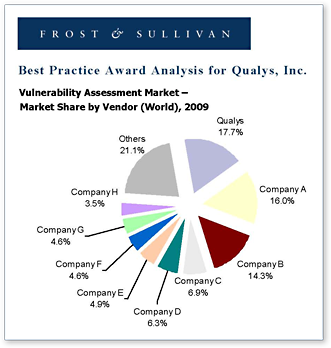 Qualys today announced that Frost & Sullivan has awarded Qualys its 2010 Global Market Share Leadership Award in Vulnerability Assessment. Based on its recent analysis of the market, which included in-depth interviews of customers, partners and vendors along with market analysis, the award recognizes excellence in capturing the highest market share within its industry and highlights Qualys' innovative strategies that have enabled growth.

The award report states, "Frost & Sullivan’s research shows that Qualys has been able to grow at a rate that far surpasses that of its competitors as a direct result of leadership in multiple areas. Not only is this continued excellence critical for Qualys' success as a company, but Qualys' leadership is driving the vulnerability assessment market’s growth as well."