In the last 10 years hackers have routinely taken advantage of web application vulnerabilities to successfully breach organizations. During that time there has also been an increase in the use of malware hosted on websites to infect unsuspecting users. Many times a vulnerability in a website is exploited to setup the malware that a legitimate website may then deliver. The relationship between website vulnerabilities and malware is one that is likely to continue to increase. The Verizon 2012 Data Breach Investigation Report notes: “Out of the 855 incidents this year, 81% leveraged hacking, 69% included malware, and an impressive 61% of all breaches featured a combination of hacking techniques and malware.“  The combination of threats presents organizations with a new challenge when trying to identify both web application vulnerabilities and malware that may exist on their sites.

In announcing Qualys WAS 3.0, organizations now have away to address the need to detect not only web application vulnerabilities, but also malware that may infect these same web properties.  Qualys has offered the Malware Detection Service as both a freemium solution for individuals and as an Enterprise Edition for larger organizations that need to protect a large number of websites. With WAS 3.0, Qualys has integrated this malware detection capability into the WAS solution to make it easy for organizations to configure both types of scans from WAS. Although the services are integrated, the way the scanning is executed and the threats that are identified by vulnerability scanning and malware detection are very different. Now that we’ve outlined the integration at a high level, lets go into a little more detail about how each type of scanning is performed, and how they are integrated in WAS 3.0. 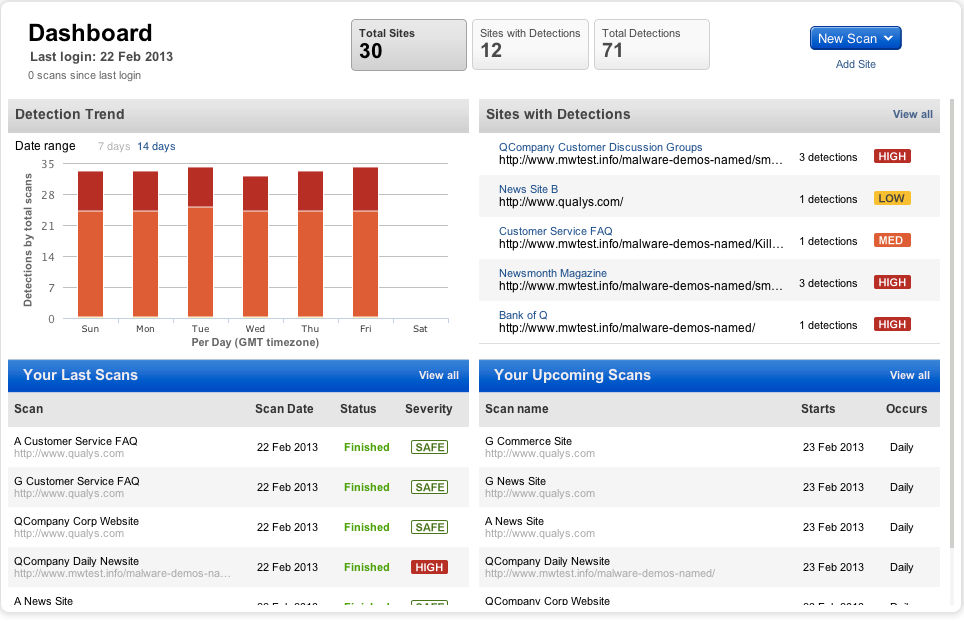 Qualys WAS works by interacting with a web application or website just as a user would, but does so in a fully automated way. The WAS scanner will request pages, login and follow links to new pages, posting forms as it goes. While interacting with the site, WAS injects hostile payloads and then observes how the web application responds. If the web application responds in a given way, WAS can determine that the application is vulnerable to the specific attack used. This is the same type of action that a penetration tester or malicious hacker would use to discover these vulnerabilities, but it is done in an automated way that takes a fraction of the time that it does for a human. This makes the automated scanning far more cost effective.

The Malware Detection Service (MDS) takes a different approach to detection. While MDS also automatically interacts with the site as a user would, navigating and following links, it uses a much different technique to detect malware.  MDS primarily uses Behavioral Analysis to identify when a website is infected with malware. MDS actually interacts with websites using an instrumented vulnerable browser hosted on a virtual machine. The virtual machine is created on the fly when the scan is requested. The service then navigates the site automatically, and by observing the behavior of the system the web browser is hosted on via the instrumentation, the service can detect when activities associated with malware take place. So instead of looking for something specific in the content itself, it is instead looking for what the browser and host do when pages are loaded. Behavioral analysis is superior in many ways to traditional malware detection methods because it can identify even zero-day malware that has not yet been analyzed to create a detection signature. 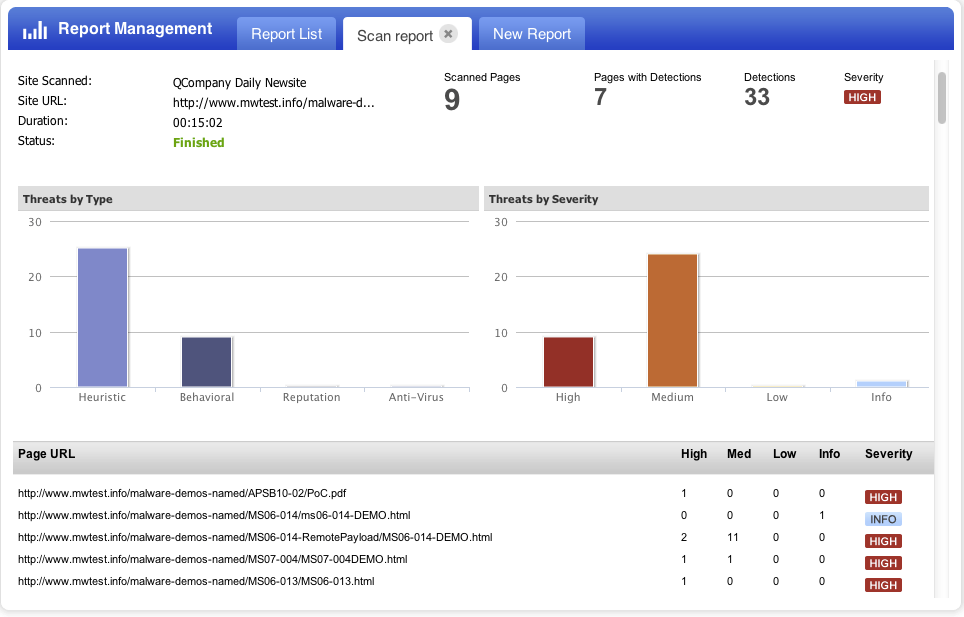 Look for Malware Close to Home

Now that we have discussed how each service works and the differences in their detection techniques, we can discuss some other differences in web application vulnerability testing and malware detection.  While web application vulnerabilities can be expected in both internal and external web applications, website malware is typically found only on Internet facing web applications. This is because malware distributors want to infect as many users as possible, so hosting malware on sites that have the most exposure is the most effective approach. Malware is also typically not likely to be distributed evenly on websites. Unlike vulnerabilities, which are usually distributed throughout a web application because they are unintentional, malware is usually found on pages that are closer to the home page for the site. This is also to take advantage of the traffic patterns of users that will typically be heavier in the pages that are the fewest clicks away from the default for the site. So while WAS will scan a large number of pages to ensure it is testing all the relevant functions thatmay be vulnerable, MDS will seek to test just the unauthenticated pages that are closest to the default page for a site, where malware is most likely to be found.

Another difference between the services that is important to note is the impact. While WAS is actively testing websites by injecting payloads and therefore usually requires advanced notice or scheduling in a maintenance window for production sites, the MDS service is purely observational and does not have any more impact on a site than a normal user would. This allows MDS to be run more often and without the notification that is typically required for running a vulnerability scan. 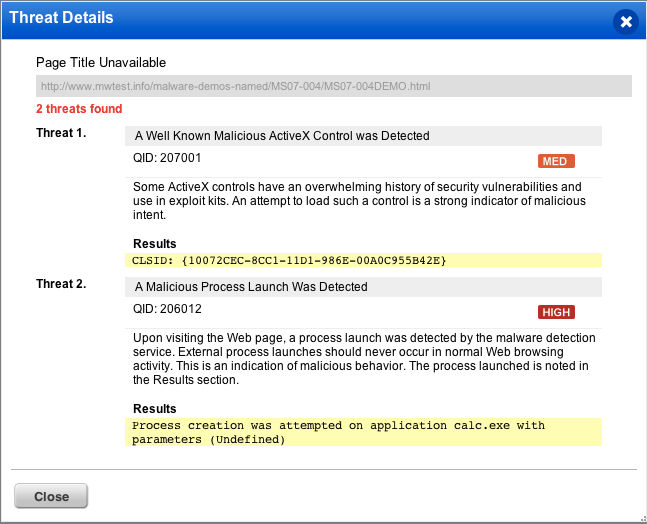 To bring these two services together, Qualys has added the ability to configure malware scanning for external web applications that are licensed in Qualys WAS. When an Internet accessible web application is being setup in WAS, the user will now have the option to indicate that they would like it to be scanned for malware. This will setup a daily scheduled malware scan for the site. If any malware is discovered the MDS service notifies the subscription owner with an email outlining the issue. Users can login to Qualys to see more details if needed.  So now organizations have an easy way to combine Web Application Scanning and Malware Detection to ensure that their Internet facing websites are free from web application vulnerabilities and malware.

Last but not least, Qualys WAS 3.0 also introduces an integration with an attack proxy tool used primarily to conduct targeted, manual application penetration and validation testing. While WAS is designed to be fully automated and scalable and is appropriate for the security testing requirements of the majority of applications, there are some web applications that require higher levels of assurance. These applications typically require both automated scanning as well as manual penetration testing activities. In most cases, web application penetration testing is primarily conducted with the use of attack proxy tools. Attack proxies offer a high level of control for skilled users and help to facilitate deep testing when it is required. Recognizing that there is a place for both automated scanning and manual testing, Qualys is moving to combine the best of both approaches by integrating attack proxy tools, enabling customers to benefit from highly automated and scalable scanning while at the same time having access to manual tools when additional exploitation or risk evaluation is required.

Qualys WAS 3.0 takes the first step in this evolution by integrating the scan results from Burp Suite Professional (BSP). BSP is a tool that combines interactive testing capabilities with scanning. Testers who use BSP can scan individual pages as they navigate a web application and discover vulnerabilities as they do so.  But BSP is primarily intended for use by a single user. There is no centralized storage for results that would allow them to be shared by multiple users, or to be tracked and trended over time. Qualys seeks to overcome this limitation by providing a way to import the BSP scanner findings. This gives organizations a way to store the findings discovered in the BSP scanner with those discovered by Qualys WAS.

UPDATE: Qualys has released a Burp extension for WAS to make the integration even more seamless and easy to use.

As you can tell, Qualys WAS 3.0 is a major release with a lot of new capabilities that will help organizations better combat the growing threats to their web applications. We’re excited by the new WAS 3.0 and we look forward to getting it into your hands.