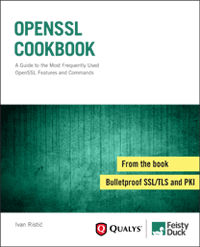 OpenSSL Cookbook is a free ebook based around one chapter of my in-progress book Bulletproof SSL/TLS and PKI. The appendix contains the SSL/TLS Deployment Best Practices document (re-published with permission from Qualys). In total, there’s about 50 pages of text that covers the OpenSSL essentials, starting with installation, then key and certificate management, and finally cipher suite configuration.

The first version of OpenSSL Cookbook was published in May, but now, five months after that release, I’ve released version 1.1. The changes in this version are as follows:

You can get your copy from here.