In October we made several changes to how we produce our monthly SSL Pulse reports. They include starting tracking Forward Secrecy and RC4, and removing the requirement to mitigate BEAST server side.

Given the increased importance of Forward Secrecy (FS) in SSL/TLS server configuration, SSL Pulse now tracks support for it among the servers in our data sample.

Just before the October SSL Pulse scan began, we made some tweaks to the way we test, moving away from a simple binary test (Yes or No for Forward Secrecy support) to something more granular and more useful. Now, there are several possible outcomes:

You can see the October results in the following screen capture: 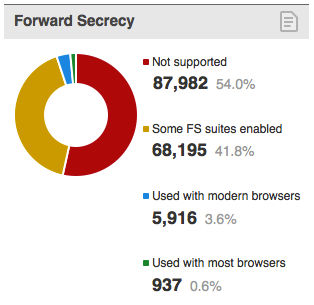 We took this opportunity to also start tracking support for RC4 suites. As you may remember, earlier this year we learned that RC4 is much weaker than previously thought. In SSL Labs we now categorise RC4 support as follows:

And the results are as follows: 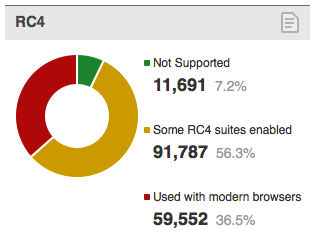 As you can see, the green area is very small; only 7.2% servers do not support RC4. This is not very surprising, as RC4 is one of the most popular ciphers in SSL. Most servers (56.3%) have at least one RC4 suite enabled, but they are not always used. But more than a third of servers (36.5%) actually use RC4 with at least one modern browser. This is the number we need to bring down.

This month we stopped requiring server-side mitigation for the BEAST vulnerability. Even though BEAST can still be a problem for some, the impending threat of RC4 means that we must give up on BEAST so that we can start phasing RC4 out.

Given that we are not yet penalizing servers that support RC4, the change in our rating means that there is a much higher number of servers that we consider secure: 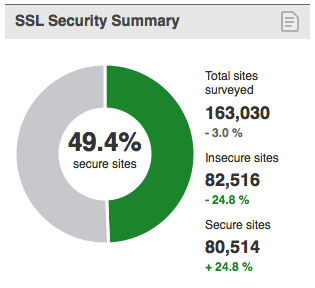 But, with more than 50% of the servers supporting RC4, the number of secure sites will most definitely fall again in the following months.