It used to be difficult or outright impossible for employees to install and use unapproved software on their work computers. For many IT departments, those happy days are over.

Web apps’ proliferation combined with mobile devices’ ubiquity have drastically lowered the bar —  or removed it altogether — for people to use software of their own choosing at work.

Whatever you call this trend — Consumerization of Enterprise IT, BYOD, Shadow IT — the bottom line is: It’s easier than ever for employees to bypass their IT department and adopt apps, whether the web server’s client is a browser or a mobile app.

This new era of end user empowerment (or anarchy, depending on your perspective) opens a Pandora’s box of security and compliance risks.

Meanwhile, enterprises have also caught the app bug and are “appifying” many operations to make life more convenient for employees, customers and partners. Unfortunately, many custom and commercial apps aren’t securely developed nor properly tested, and contain dangerous vulnerabilities and configuration gaffes.

In short, web application security has become critically important, but unfortunately it’s underestimated by many organizations.

In this post, our latest in the Qualys Top 10 Tips for a Secure & Compliant 2017 blog series, we’ll discuss tips 8 to 10, which address the importance of: 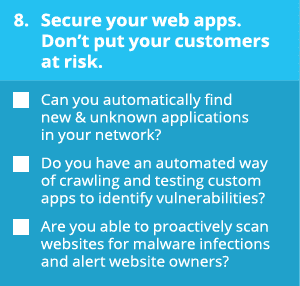 So what’s the big deal about unsafe web apps? In a nutshell: The typical organization uses hundreds or thousands of them, and often these apps are vulnerable to major attacks.

Hackers know this, and they also know that these Internet-facing apps are usually linked to back end systems and data, so they’re constantly trying to breach them.

When they breach a web app and get a direct conduit to corporate data, hackers can steal customer identities, money and intellectual property.

Moreover, almost all — 95 percent — of confirmed web app breaches were financially motivated. “The greater complexity, including the web application code and underlying business logic, and their potential as a vector to sensitive data in storage, or in process, makes web application servers an obvious target for attackers,” reads the report.

The costs an organization incurs in the messy aftermath of a data breach are varied and include fixing systems, notifying and supporting customers, hiring investigators, paying fines and battling lawsuits, not to mention the hits from lost sales and brand damage.

Not fun. Here are some tips to help you avoid this hellish situation:

Instead of flying blind, you need a comprehensive inventory that lists all your apps — approved and unapproved, commercial or custom built — wherever they are in your IT environment: internal networks, public clouds or mobile devices.

Your app catalog should also contain their software components, vulnerabilities and misconfigurations. This app crawling and scanning process should be automated so that it’s done continuously and at scale.

“It takes a village to protect applications,” concluded SANS Institute in its 2016 State of Application Security report. 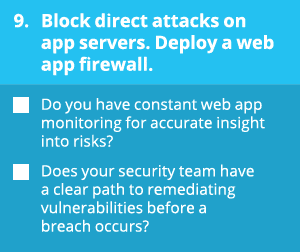 Even if your organization follows stringent app security processes, you need a WAF to protect your organization from dangers that arise after apps have been deployed in production, such as newly disclosed vulnerabilities or inadvertent coding or configuration errors.

“It is the primary function of a WAF to secure web applications against detected vulnerabilities, with as little effort as possible, so that they cannot be exploited by attackers. This is already a very challenging task due to the high degree of complexity of the typical web-application infrastructure,” reads OWASP’s “Best Practices: Use of Web Application Firewalls”

In addition to giving your InfoSec team a chance to patch and mitigate, a WAF is a common requirement of regulations, standards and policies.

WAFs come in all shapes and colors, but below are some elements that will determine whether yours is effective:

Tip #10: Protect your customers — and your brand — from malware infections. 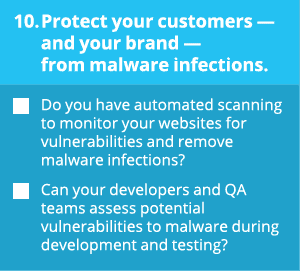 The malware then can be used to infect the devices of website visitors and to attack site owners’ back end systems.

It’s not a rare occurrence. Victims include the Google and Yahoo ad networks, the WordPress web publishing platform and the NBC,  New York Times, BBC, AOL and MSN web sites.

And it’s a huge problem. In April, Google reported having detected almost 800,000 compromised websites over the previous 12 months, and estimated that on any given week, more than 10 million users visit harmful websites.

So how can you protect your websites from malware?

We’ll wrap up this series next week with a summary of all ten tips.

In case you missed them, below are links to the first three posts in this series: