It’s not yet Thursday, but attendees at Qualys Security Conference 2017 were treated to a major “throwback” as CEO and Chairman Philippe Courtot journeyed back centuries during QSC17’s opening keynote to illustrate the seismic changes of today’s digital revolution.

Courtot cited some of history’s biggest shifts, such as the development of the printing press, which dramatically accelerated the distribution of knowledge, triggering massive political and economic changes, as well as Copernicus’ heliocentric model, which upended astronomy.

The difference is that changes of that magnitude are happening much more frequently in our time, as the Internet powers developments driven by digital technologies at dizzying speeds.

“A confluence of technologies is coming at us at an accelerated pace,” Courtot told a jam-packed ballroom at the Bellagio Hotel in Las Vegas, where hundreds of Qualys executives, engineers, customers and partners are attending QSC17. 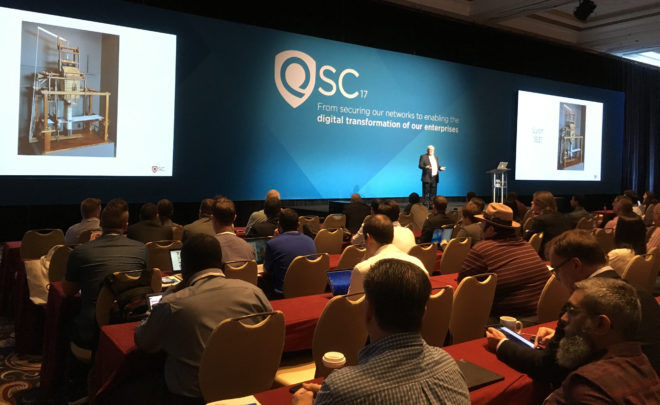 Those disruptive developments include self-driving cars, fuel cell vehicles, the CRISPR family of DNA sequences, and, in the world of IT, technologies like block chain, artificial intelligence, containers, biometrics and quantum computing.

Likewise, a major shift has been in the works in the world of InfoSec, one that Courtot has been articulating relentlessly for many years: The impact of cloud computing on security.

Specifically, Qualys has since its beginnings believed that providing security via a cloud architecture would help solve many of the limitations of on-premises, legacy security software, and allow organizations to secure their increasingly distributed and hybrid IT environments.

As Courtot showed a picture of himself on stage at RSA Conference in 2012 delivering a keynote titled “The urgent need for a more effective approach to security” he joked that, as a result of his constant evangelizing for cloud-based security in 21st century America, “I wasn’t put under house arrest.” However, he did get pushback from many security industry executives who saw this development as a threat to their companies’ business models.

Time has proven Qualys correct, as the industry finally has come around and realized the tangible, concrete benefits of cloud-based security software that Qualys has been delivering to its customers for many years, including flexibility, scalability, simplicity and cost-effectiveness.

“You’re the ones who truly helped us,” he told the customers in the audience, acknowledging that in the early days, it wasn’t always easy for many of them to convince their organizations that the Qualys approach was the right one.

Most importantly, this cloud architecture allows organizations to build security natively and organically into their new, digital transformation efforts, which are mostly delivered via Internet-powered technologies, such as public and private clouds, IoT, mobility and web apps.

With the centrally managed Qualys Cloud Platform, which powers an ever-growing suite of natively integrated Qualys security and compliance apps, organizations can drastically simplify their security stacks, by eliminating heterogeneous point solutions that are difficult and costly to maintain and integrate.

More and more customers are realizing the benefits of Qualys’ true platform approach. For example, the percentage of enterprise customers with three or more Qualys apps has more than doubled in the past three years, from 13% in mid-2014 to 28% in mid-2017, Courtot said.

The Qualys Cloud Platform also provides instant, continuous visibility via its scanners and Cloud Agent of IT assets everywhere – on premises, in clouds and at endpoints. The platform also offers centralized storage and real-time analysis of IT, security and compliance data; a continually updated, “single pane of glass” view of their security and compliance posture; and dramatically lower TCO.

“With your help and your support, we can continue making security easier, better and more cost effective, which is absolutely what we’re focused on,” Courtot said.