While malicious hackers are the obvious enemies of InfoSec pros, there’s something else that puts IT environments in danger: Perfectionism.

When applied to security, perfectionism becomes detrimental, creating a false certainty that all bases are covered and yielding a fundamentally flawed approach to protecting enterprises from attacks, according to Neil MacDonald, a Gartner Distinguished Analyst and Vice President.

“Perfect security is impossible,” MacDonald said during a keynote speech at the Qualys Security Conference 2017 on Thursday. 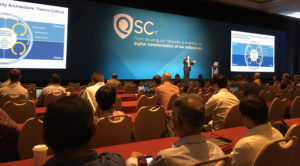 Regardless of how hard organizations try to prevent breaches, hackers will eventually get in, so organizations must have tools and processes in place for those scenarios, he said.

Unfortunately, most organizations have focused too little on breach detection and response, so that when a hacker gets into their network, they’re grossly unprepared to deal with that situation.

“Once a bad guy gets past the gate, there’s very little in place currently that stops him,” MacDonald told QSC17 attendees at Las Vegas’ Bellagio Hotel.

Downplaying Breach Response Can Be Costly

For example, an organization may not detect a breach until weeks or months have gone by, because they don’t have the ability to monitor network traffic for abnormal patterns, nor identify suspicious user behavior or others indicators of compromise.

Once the breach is identified, the organization may be ill prepared to contain it, and afterwards, it may struggle to analyze how and why it happened, and what was the extent of the damage.

Thus, organizations need to place as much importance on detection and response, as they do on prediction and prevention. “We need both sets of capabilities working together as an integrated system,” MacDonald said.

Currently, it takes organizations an average of almost 100 days to detect a breach, at a cost of about $4 million per incident, numbers that are “off the charts” and indicate there is a lot enterprises must do to improve in this respect, he said.

When an organization has a balanced set of security processes and technologies, it’s able to do what Gartner refers to as “continuous adaptive risk and trust assessment” or CARTA.

“We need to make security a continuous decisioning process that weighs risks against trust all the time whenever possible,” MacDonald said.

This means having continuous visibility and assessment of end users, systems, system activity and other relevant elements, so that the organization’s security and compliance posture can be continually adjusted as necessary, and the right actions taken at any given point.

It’s implicit that InfoSec teams will be collecting, analyzing and correlating very large amounts of security and compliance data in order to inform their decisions. “InfoSec is becoming a Big Data analytics problem,” he said.

In this, security vendors, especially those claiming expertise in data analytics, must help their customers instead of putting the onus on them to make sense of all of this information.

Don’t Forget About Your DevOps Environment

CARTA applies not only to the “runtime” IT production environment but also to the apps that are in development, in particular in iterative, agile DevOps teams, where developers and IT ops staff work collaboratively to deliver code quickly and continuously.

It’s key for InfoSec teams to unobtrusively embed their automated security tools within the development environment via APIs, so that security scans, testing and monitoring happen transparently, without disrupting the flow of the DevOps pipeline. If that’s achieved, the organization will have successfully turned their DevOps teams into DevSecOps teams.

Within DevOps environments, InfoSec must pay particular attention to the third-party components, modules, frameworks, libraries and toolkits that developers use broadly today to assemble modern applications.

Those external elements often make up 90 percent of a custom application’s code, and they can contain all sorts of vulnerabilities and other security problems, so InfoSec must have clear visibility into all of the components in the apps their developers are putting together, especially within containers, he said.

MacDonald recommends that organizations demand their InfoSec vendors do these five things:

He also summed up a series of best practices and tips for InfoSec teams to implement and adopt, including:

He closed by reminding the audience that security is “a journey” of constant improvement. “It doesn’t have to be perfect,” he said. “We can continue to improve over time.”