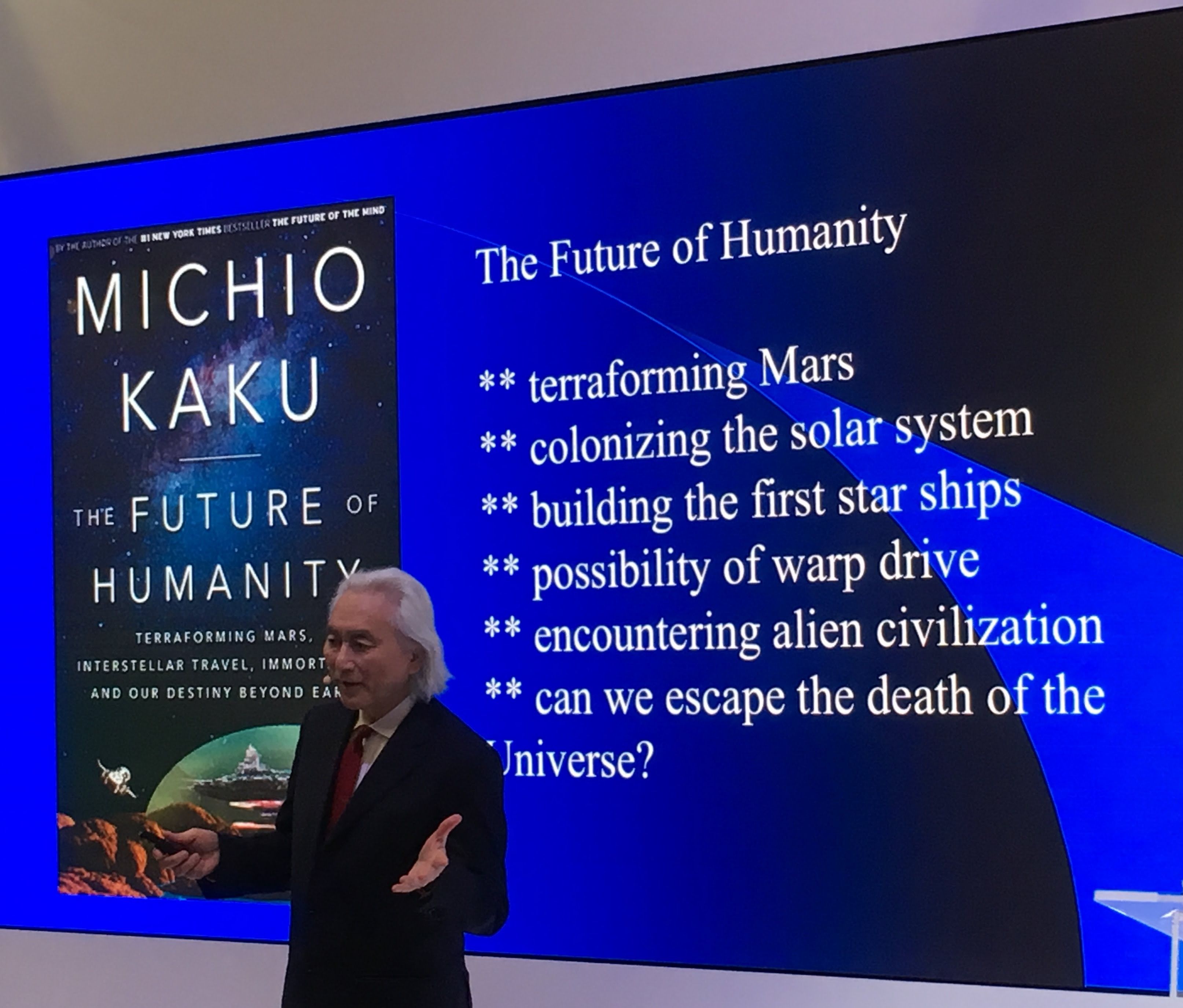 Contact lenses that access the Internet literally at the blink of an eye. Toilets that detect cancer-indicating enzymes. Human settlements on Mars. Beaming one’s mind into outer space using lasers. Watching a video of your dreams after you wake up.

Those were just a few of the mind-blowing predictions made by Dr. Michio Kaku at RSA Conference 2018, where he transformed Qualys’ expo booth into a time-traveling vehicle.

For about 30 minutes on Tuesday, the famed physicist led his entranced audience on a spellbinding journey to a future he believes will become a reality in the decades to come.

A new golden age of space travel is upon us

Anchoring many of the advances he described is what he calls a second golden age of space travel, which will trigger and accelerate groundbreaking innovations in artificial intelligence, biotechnology and nanotechnology.

“There’s a new energy, a new vitality, as we go back to outer space,” said Kaku, a theoretical physicist, futurist and university professor who has his own syndicated radio show and has published several best-selling books.

He’s hopeful about this new age of space travel primarily because it’s being driven by private sector entrepreneurs such as Jeff Bezos, Richard Branson and Elon Musk who are not only providing the expertise and the investment, but also a vision.

While in the 1960s the space program’s goal was to beat the Soviet Union in the race to the Moon, this time around the motivations are deeper and better defined, in Kaku’s view.

For example, Musk is driven by his belief that humanity needs options for living outside of Earth. Branson’s pursuit is space tourism. Bezos wants to move heavy industry and its pollution to outer space, for the environmental benefit of our planet. Google executives created a company focused on mining asteroids to extract valuable resources from them.

“We have a new vision driving the space program,” Kaku said.

He’s also encouraged by the U.S. government’s renewed commitment to space travel, and by NASA’s plans to make Mars a viable place for humans to live. This will involve the use of solar panels to generate power on the red planet, and the mining of ice to obtain oxygen and sources of fuel, and to support agriculture. 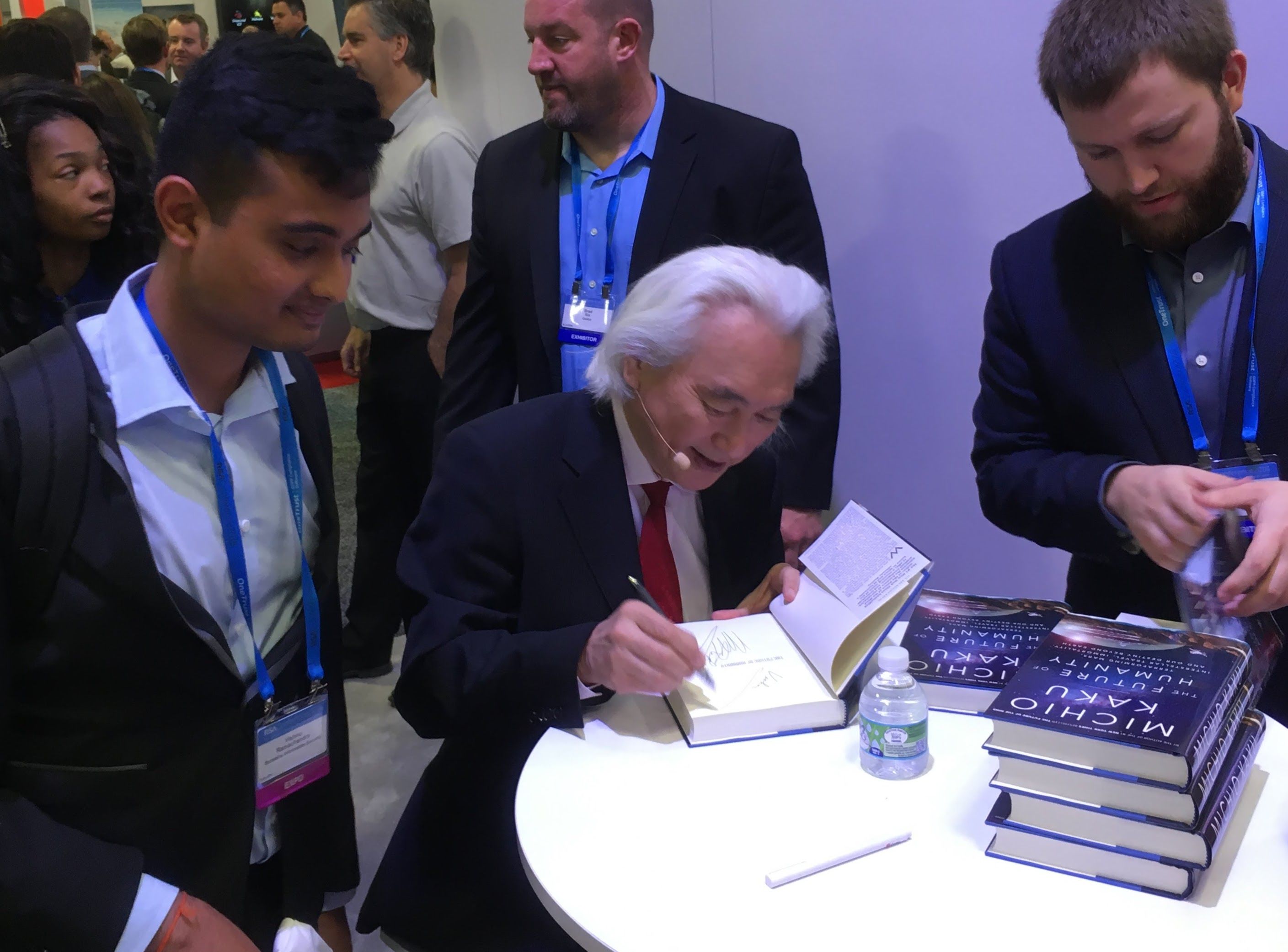 Kaku credits the U.S. space program of the 1960s with leading to the creation of the microchip, because transistors needed to be miniaturized for the spaceships. This in turn set off Moore’s Law — the doubling of the number of transistors in a chip every two years, and the exponential increase in computing power that continues to this day.

However, Kaku predicts the eventual collapse of Moore’s Law, as the layers of silicon get reduced to such sizes that leakage and heat will end to the chain of microchip improvements. He forecasts this will happen in about 15 years.

“Eventually, Silicon Valley could become a Rust Belt,” he said referring to the parts of the U.S. that thrived on industrial manufacturing only to see that sector decline and cripple those cities’ economies.

But fear not. Silicon will be replaced by a new generation of microchips built using things like molecular transistors, and these developments will usher in the age of quantum computing, where the processing occurs in single atoms.

Quantum computers, which are in early stages of development and testing, will be orders of magnitude more powerful than our current systems, and consequently they’ve drawn the attention of all major tech companies.

“They realize this could be the future of the world economy,” he said.

Quantum computing will have branches such as quantum cryptography, which will help improve security and privacy.

BrainNet — the future of the Internet

Kaku believes the Internet will evolve into what he calls “BrainNet,” which will be instantly accessible via connected contact lenses, and which will be the repository not just of factual data, but also of people’s emotions, feelings and sensations.

For example, it will be possible to upload memories, which will be great for victims of Alzheimer’s disease. “We’re going to have a brain pacemaker. We’ll push a button and memories will come flooding into your mind,” he said.

As he has explained before, this would require mapping all neural-networks of the brain that contain a person’s memory, including their dreams and desires, and getting this information digitized and stored. 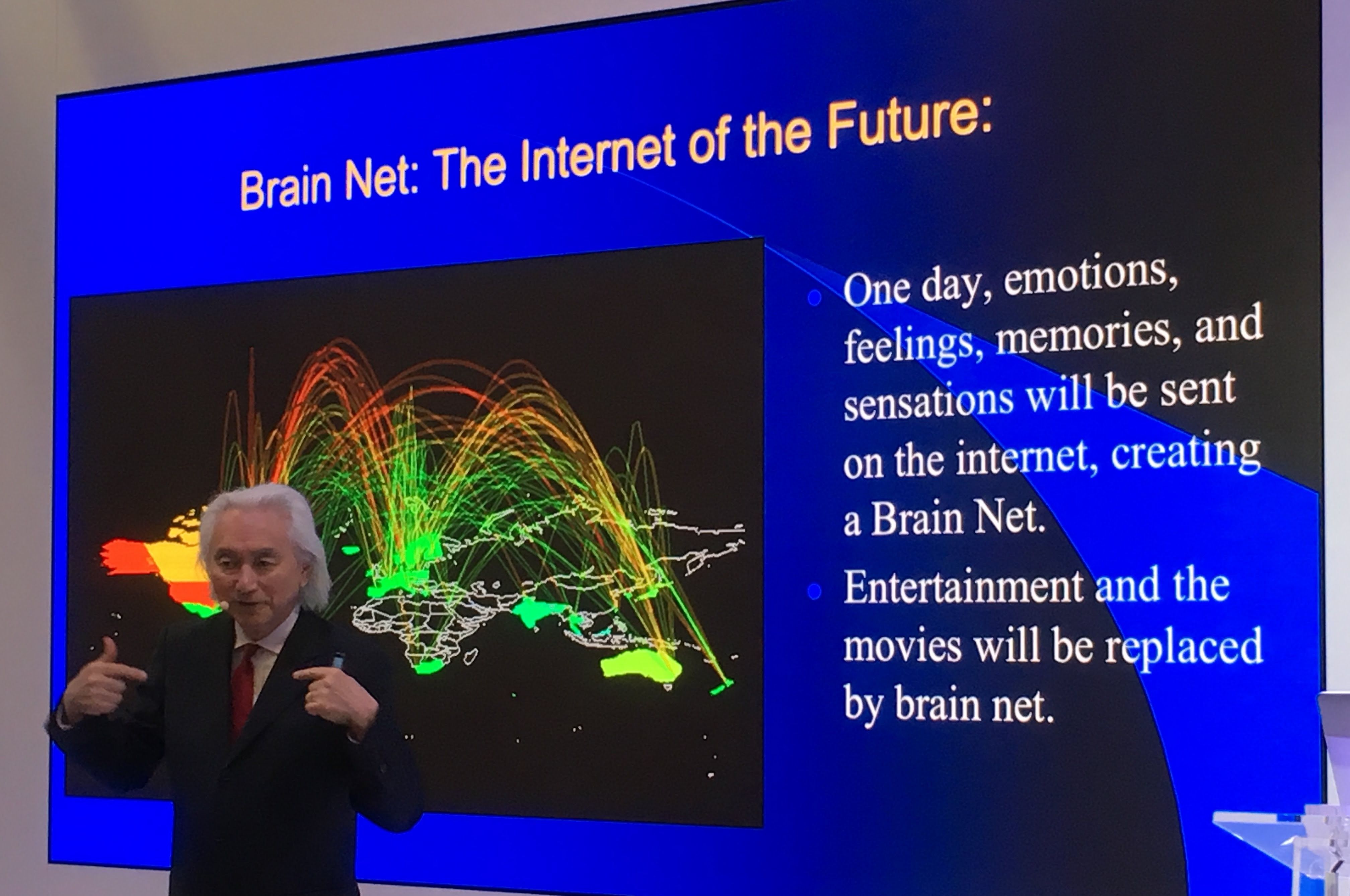 This “digital consciousness” could be shot into outer space on a laser beam, allowing people to travel in space without physically leaving Earth, by using a mechanical “superhuman” surrogate. “This is the most efficient way to colonize the galaxy at the speed of light,” he said.

Touching on artificial intelligence, Kaku said today’s robots are extremely dumb, but that their technology will advance quickly, making them progressively smarter, until they’re at the level of primates.

At that point, robots will possess self-awareness, and caution will be warranted, he said.

In medicine, no more tumors

Kaku’s vision for healthcare is tremendously encouraging. For example, he predicts that organs, such as ears, bladders and even livers, will be grown artificially and implanted on patients.

With the use of pill-like sensors and the aforementioned “smart” toilet, people will be diagnosed at the earliest stages of ailments such as cancer. “The word ‘tumor’ will disappear from the English language,” he said.

Addressing psychology, Kaku said humans are “genetically hardwired to bellyache all the time,” a trait that won’t change, regardless of future advances. And this is a good thing, because this persistent human dissatisfaction with things as they are leads to progress.

Kaku has lofty credentials — he co-founded string field theory and seeks to carry on Einstein’s quest to unite the four fundamental forces of nature into a single grand unified theory of everything. But with his mop of white hair, perennial smile and raconteur-style of speaking, he comes across as personable and down-to-earth. 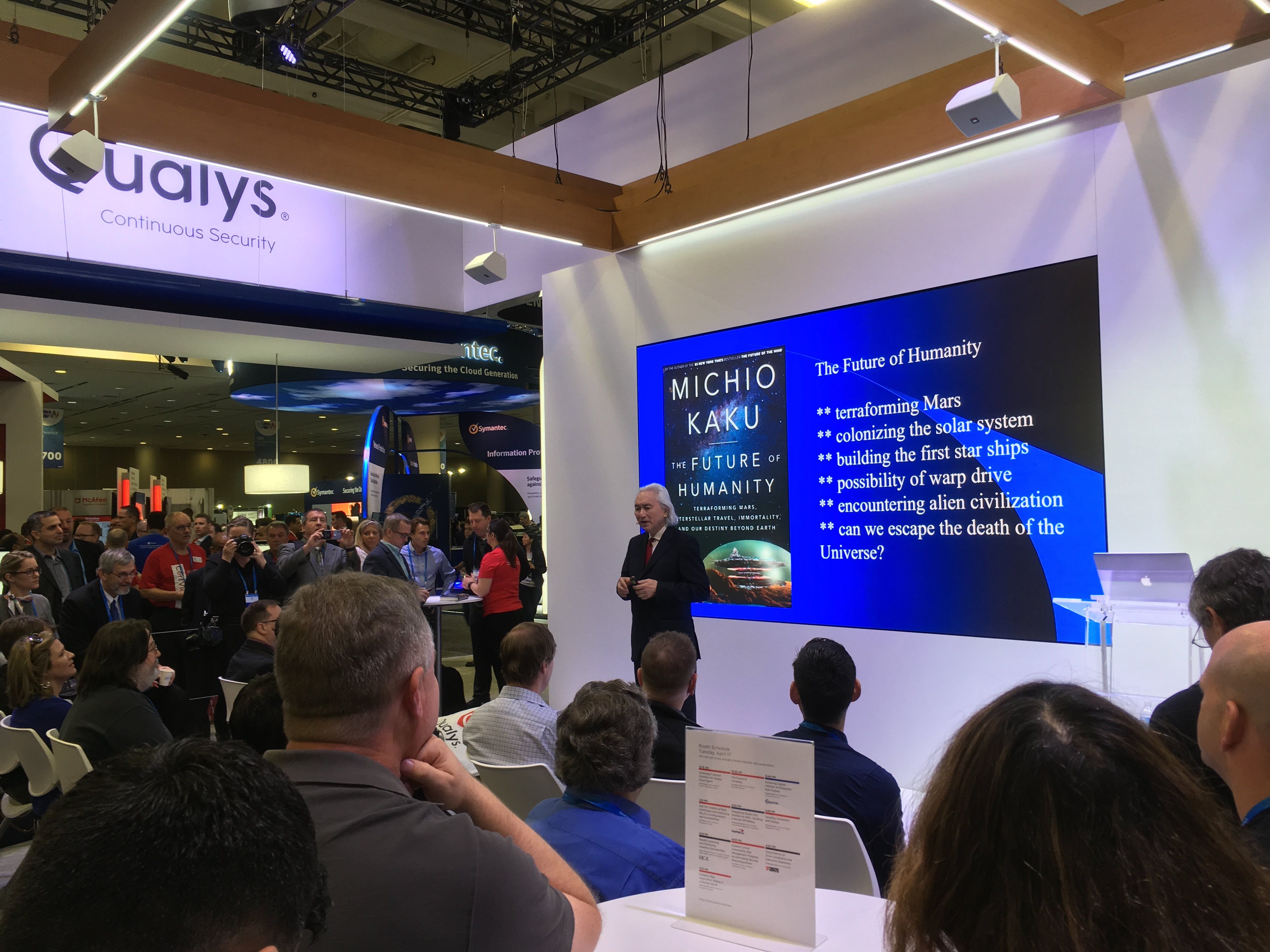 He’s also quite funny. Kaku peppered his presentation with joking references to Yogi Berra, Madonna, blind date liars, and people who swear they were abducted by aliens.

And for all his future vision, Kaku seems very aware of humanity’s mores in 2018.

“Afterwards I’ll be signing your copy of my latest book,” he said as wrapped up his talk and referred to his New York Times best seller “The Future of Humanity,” published this year.  “Then after that you can go to eBay and auction the book – yes, you can make money after today’s talk.”

Here are a few of the wisecracks he delivered at the Qualys booth: