Today Qualys is releasing QID 13038 in VULNSIG Release VULNSIGS-2.2.831-5 for remotely detecting ShellShock. For details on BASH ShellShock, refer to Wolfgang’s blog BASH Shellshock vulnerability – Update2.  As you may know there could be multiple exploit vectors and the most popular remote vector is via the use of a cgi script using HTTP headers. QID 13038 is based on a similar technique.  If you need a complete inventory of your machines that need patching we recommend that you use the authenticated QID 122693 and QID 122698.

The signature sends a HTTP request to the web server with the following User-Agent:

On vulnerable targets this will execute the “/usr/bin/id” command. If you want to run the signature manually using curl you can send the following request or you can use the “Default User Agent” plugin from Firefox.

Substitute $URL with the CGI URL you want to test. Vulnerable systems will return the output from the /usr/bin/id command as shown below: 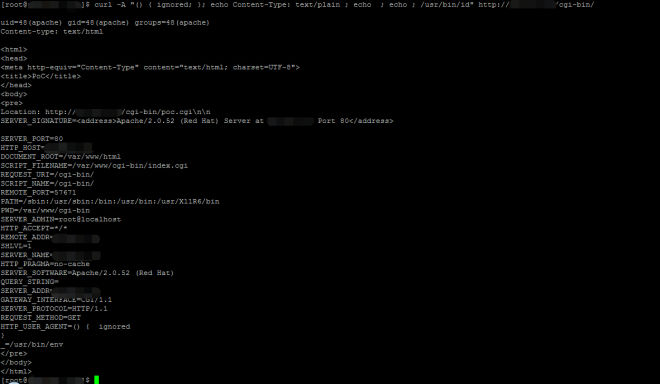 The Qualys signature sends the request to the default directory and a couple of other well-known directories. The signature does not craw the entire website to send the request against all files. To conclude, use QID 122693 for authenticated detection of CVE-2014-6271 (refer to https://community.qualys.com/blogs/securitylabs/2014/09/24/bash-remote-code-execution-vulnerability-cve-2014-6271), QID 122698 for authenticated detection of CVE-2014-7169 and QID 13038 for an un-authenticated check.