Recently three students from University of Saarland in Germany discovered that the MongoDB databases running on several thousand commercial web servers allow remote attackers to easily access and manipulate the database from the Internet. According to their research, it is not uncommon for MongoDB databases to be configured to accept any connection from the Internet.

In this blog I will discuss how unauthorized access works and how to check if your MongoDB is exposed. Qualys Vulnerability Management has released QID 19965 to check for the same.

The MongoDB service is running on TCP port 27017 by default, but database administrators can of course change it to another port.

To identify the service, a message with a Query “OpCode” with “whatsmyurl” in the request is sent.

In the reply from the MongoDB service, you should see the “requestID” at offset 9 which will be followed by \x01\x00\x00\x00. This signifies that it is a response to your previous request. You could also match other fields like “you” or “ok” in the document structure to confirm that MongoDB is running, as shown in the screen capture below. 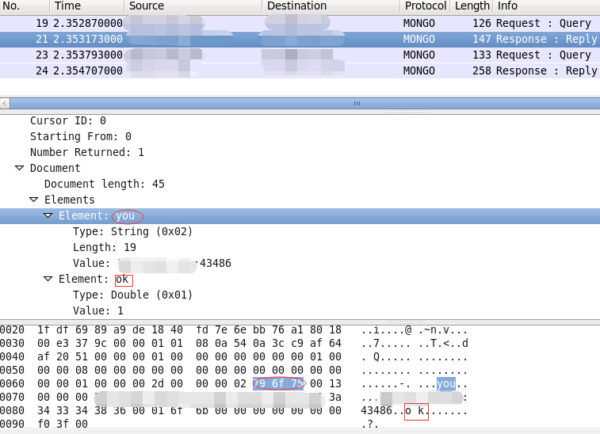 The second step of our detection is to send a “list Databases” query to the remote MongoDB server. Targets that are exposed to unauthorized access should return the packets shown in the screen capture below. If the remote service returns its databases list and ‘sizeOnDisk’ which means our “list Databases” got executed, we can conclude that it allows remote access without authorization. At this point an attacker could run the MongoDB client to connect to the server and perform any unauthorized action or take control of the database, as shown in the screen capture below.