The security issue is tracked as CVE-2019-12643 and has received a maximum severity rating score of 10 based on CVSS v3 Scoring system.

This vulnerability resides in the Cisco REST API virtual service container, however, it affects devices running Cisco IOS XE Software when exploited. A successful exploit could allow the attacker to obtain the token-id of an authenticated user. This token-id could be used to bypass authentication and execute privileged actions through the interface of the REST API virtual service container on the affected Cisco IOS XE device.

Qualys has issued QID 316494 for Qualys Vulnerability Management that covers CVE-2019-12643 for Cisco IOS XE. This QID is included in signature version VULNSIGS-2.4.689.

You can search for this new QID in AssetView or within the VM Dashboard by using the following QQL query:

Qualys has also published an importable widget for tracking this vulnerability in the Qualys VM Dashboard Beta.

If you are scanning all open ports, you can find any exposed Cisco Rest APIs by searching Qualys Global IT Asset Inventory with the following query:

Or you could build a simple widget with the same query: 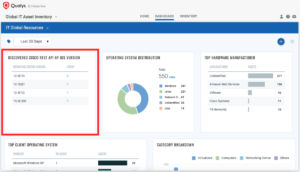 If this command does not exist, produces an empty output, or if the string Enabled, UP is absent, the device is not affected by the vulnerability described in this advisory.

The “version:” number is used to identify the patched/unpatched release version.

If the output of this command shows a combination of virtual service name and version as unpatched release number, the device is using a vulnerable REST API virtual service container.