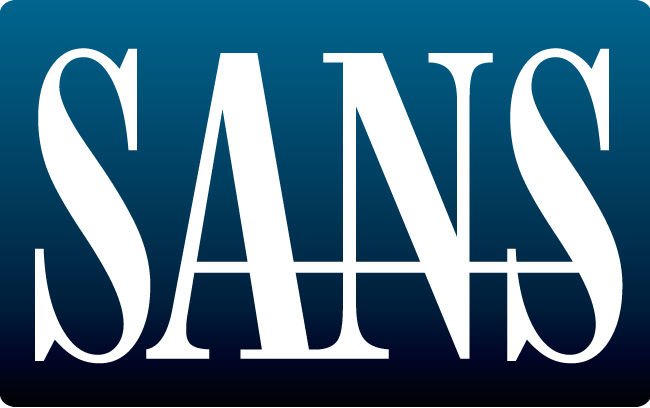 When a bank recently created a consumer mobile wallet, it built the entire project — from development to deployment — in the cloud, an increasingly common decision among enterprises.

A less common step taken by this multinational bank and Qualys customer was incorporating the security team from day one. It recognized that the safety of the application was as critical for its success as its feature functionality.

In doing so, this bank tackled a challenge that organizations face as they move workloads to public cloud platforms: Protecting these new cloud workloads as effectively as their on-premises systems, but with processes and tools that are effective in both environments.

In a recent webcast, SANS Institute and Qualys experts addressed this issue in detail, offering insights and recommendations for security teams faced with protecting hybrid IT infrastructures’ assets on premises and in public clouds.

As this happens, InfoSec teams find that safeguarding these environments can be complex. “Security teams have rallied around the idea that this is something they need to live with,” Dave Shackleford, a SANS analyst and instructor, said during the webcast.

For example, having visibility into their workloads and assessing their security posture can be challenging, given that they have less control over these multi-tenant cloud platforms. InfoSec teams also need to figure out which new tools, expertise and staff they may need to acquire.

Recently, there have been many incidents where organizations have left cloud storage buckets unprotected, exposing confidential business and customer data publicly on the Internet. For example, The Los Angeles Times left an Amazon AWS S3 bucket open with read and write access. Hackers inserted malicious code into the newspaper’s website and used visitors’ browsers to mine cryptocurrency.

“We’ve got to do the due diligence, and it’s up to us to lock down this kind of stuff,” Shackleford said.

“If you’re looking at cloud workloads as these enormously dynamic, ever changing, environments, you’ve got to bake in a vulnerability management strategy from the definition of the environment in a completely automated way,” he said.

— Changes to approved system images; to privileges and identity configuration; and to logging and monitoring configurations

Logging and event management aren’t new, but what’s new is the volume of logs generated in cloud environments. “It’s staggering, so people have to dig in there and go: ‘What do I really want to see here?’ And put some priorities around some of that,” Shackleford said.

In this manner, DevOps becomes DevSecOps, with security integrated throughout the software development and delivery pipeline. In the DevOps and “infrastructure as code” world, everything is software-defined, including servers (mostly VMs), containers, application stacks, networks, and access models. “Security needs to be defined in this way, as well,” Shackleford said.

Automated controls that security teams need to implement for each phase of the DevOps pipeline include the following:

— Static scanning as development and code check-in is performed

— Configuration implementation with approved templates and “infrastructure as code” definitions

“Hybrid cloud is the move. That’s where we’re all headed,” he said.

Securing hybrid IT environments with Qualys

The Qualys Cloud Platform and its suite of security and compliance Cloud Apps are ideally suited for protecting cloud and container DevOps pipelines, where the web apps that power digital transformation projects are created.

“Digital transformation is being powered by IT innovation, and security can’t be an afterthought,” said Chris Carlson, Vice President of Product Management at Qualys. “We need to bake security into this new infrastructure.”

With Qualys, you can integrate and automate security throughout the DevOps process — planning, coding, testing, releasing, deploying, monitoring — and build it into the software lifecycle instead of bolting it on at the end.

That way, vulnerabilities, misconfigurations, policy violations, malware and other safety issues can be addressed before code is released, reducing the risk of exposing your organization and your customers to cyber attacks.

“If you can get a handle on this, you’re better prepared as your IT counterparts are innovating very quickly in terms of their technology choices,” Carlson said.

Qualys Cloud Apps, such as Vulnerability Management (VM), Web Application Scanning (WAS), Policy Compliance (PC) and Container Security (CS), along with Qualys sensors, can be integrated and orchestrated via APIs with DevOps pipelines.

The Qualys Cloud Platform sensors – available as physical and virtual scanners, and as lightweight agents – are always on, remotely deployable, centrally managed and self-updating, enabling true distributed scanning and monitoring of all areas of today’s hybrid IT environments

Specifically, the Qualys Cloud Agent extends security throughout an IT environment, by working where it’s not possible or practical to do network scanning, including in static and ephemeral cloud instances.

After integrating Qualys into their DevOps pipeline, organizations obtain a clear picture of the vulnerabilities and mis-configurations of their OSes and web applications. They’re also able to remediate these security problems before launching an app into production. And by placing the Qualys Cloud Agent into the DevOps environment, they obtain continuous monitoring.

For example, in an AWS environment, after creating an AMI (Amazon Machine Image), sample instances are spun up and Qualys scans on them. After identifying and fixing the vulnerabilities and mis-configurations, the security team ends up with a hardened AMI base instance, where they place a Qualys Cloud Agent on it, and release it to production. 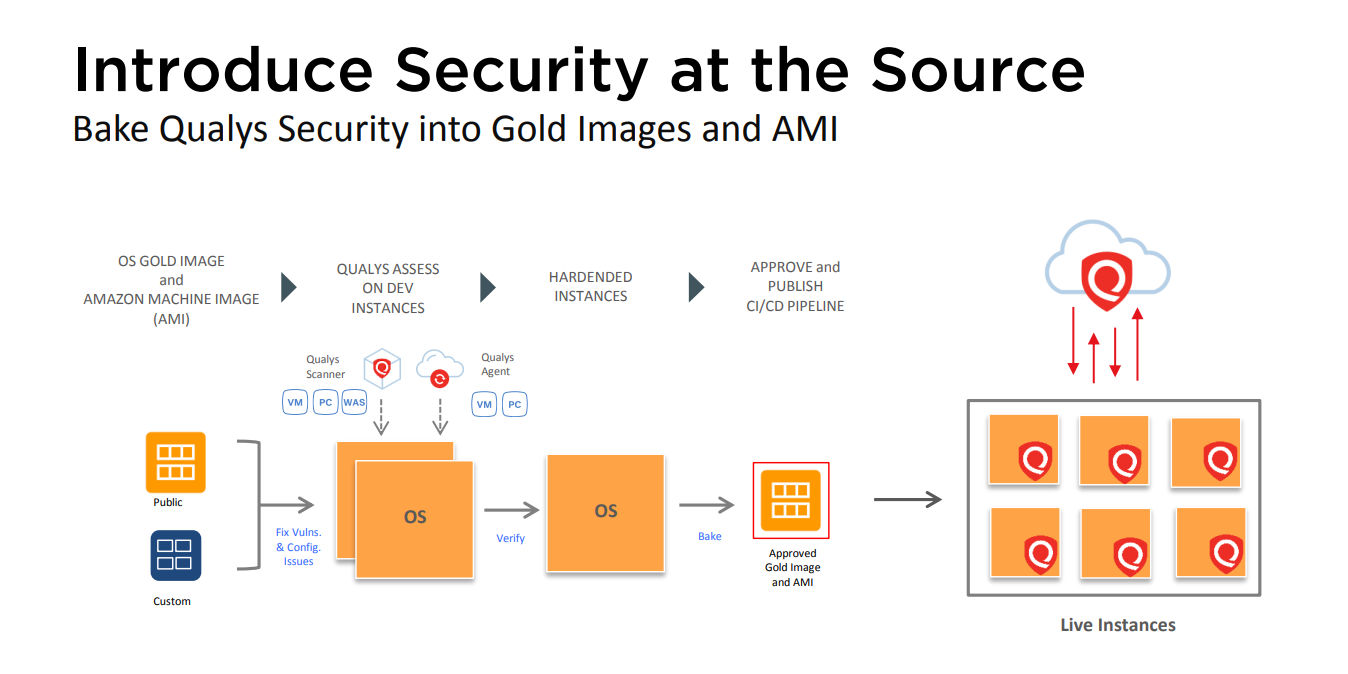 Qualys functionality for vulnerability management, policy compliance and web application scanning is supported via REST APIs so you can programmatically integrate it with your DevOps tools.

Once AMIs have been released live, Qualys monitors and tracks their security posture via dynamic and interactive dashboards. There you can search and tag instances based on attributes, and use pre-built or custom widgets to monitor deployments, all via a “single pane of glass” UI.

In addition, the Qualys Cloud Connector for AWS continuously discovers instances and collects their metadata including AMIs using API integration. As with AWS, Qualys has similar native integrations with Microsoft Azure and Google Cloud Platform.

How Qualys secures containers in DevOps

Docker containers churn much faster than virtual machines, and are much more lightweight because, unlike VMs, they can be spun up without provisioning a guest OS for each one. This is why they’re so popular in DevOps teams, as they let developers create and deploy applications more quickly and efficiently, and with an increased level of portability.

Qualys Container Security helps InfoSec teams with continuous discovery, tracking and protection of containers in DevOps pipelines and deployments at any scale, according to Carlson. Specifically, Qualys CS offers:

Qualys CS also features a native container sensor, which is distributed as a Docker image. Users can download and deploy these sensors directly on their container hosts, add them to the private registries for distribution, or integrate them with orchestration tools for automatic deployment across elastic cloud environments. 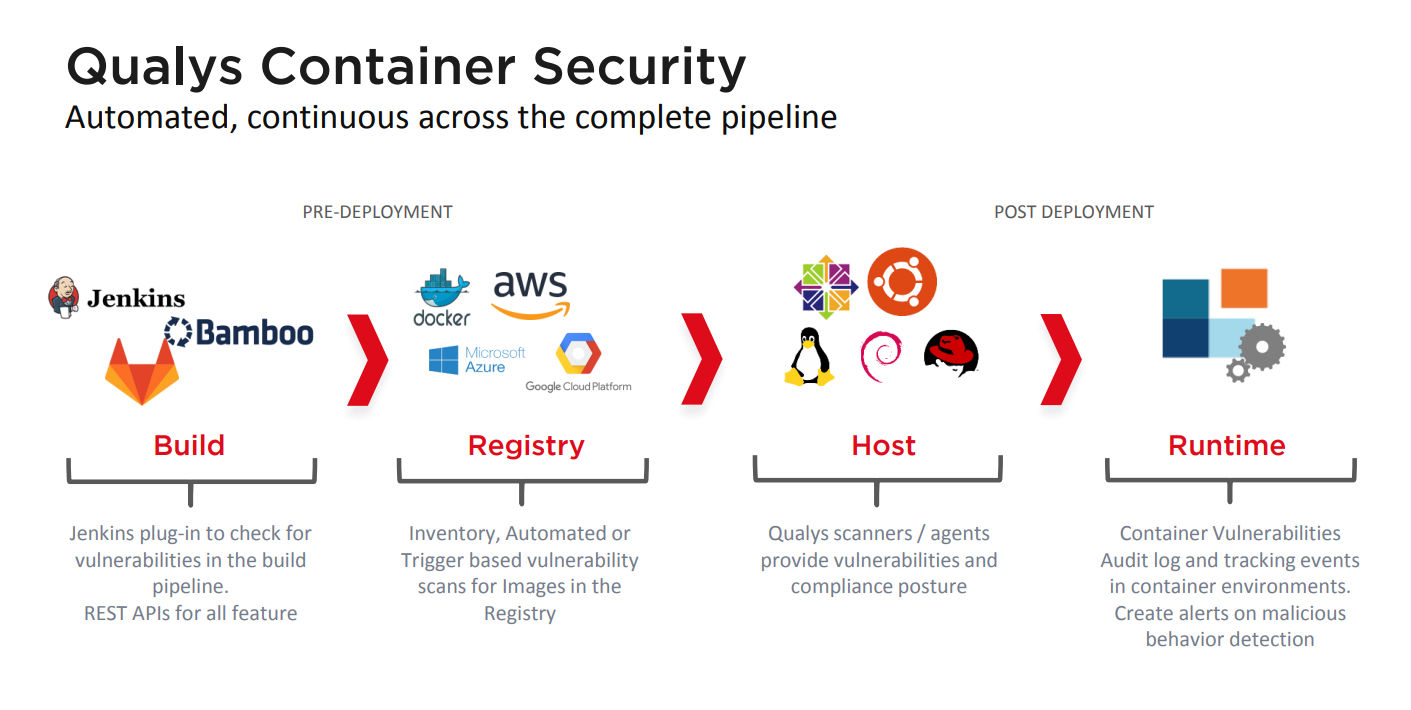 About that mobile wallet app …

Let’s circle back to the large bank’s mobile wallet, and how security was integrated into its development and deployment using Qualys. “IT and security partnered from the beginning, and leveraged each other’s technologies,” Carlson said.

From the DevOps side, the app was born in the cloud, with everything in AWS: planning, testing, regression, staging, build, deployment, and production. Complete new builds of the app are produced and deployed into AWS every 60 days.

Meanwhile, the security team transparently integrated vulnerability and compliance assessment into the DevOps process from the first day:

“They can find and fix those vulnerabilities, and verify they’ve been properly fixed on the same release cadence. They don’t wait until the app goes into production to do an assessment after the fact,” he said.