Black Hat attendees got a peek at Qualys Passive Network Sensor (PNS), a product that amplifies the already comprehensive IT asset visibility Qualys provides to its customers. By adding real-time network analysis to Qualys’ versatile set of sensors, PNS eliminates blind spots across IT environments through continuous traffic monitoring.

“Now you have instant visibility into every single asset that’s communicating on your network,” said Qualys’ Chief Product Officer Sumedh Thakar during a presentation on Passive Network Sensor at the conference. 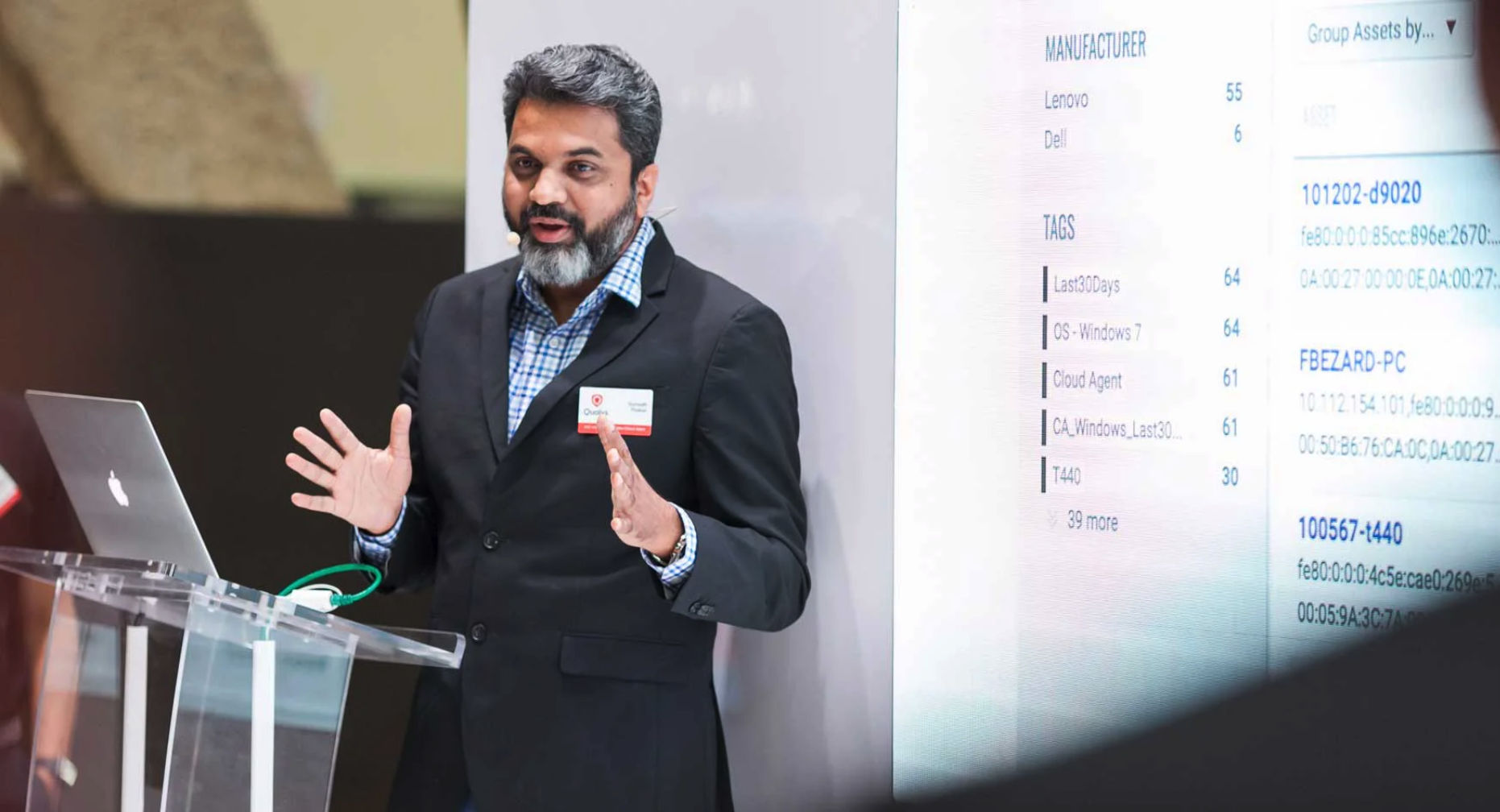 The Qualys platform collects asset telemetry from your hybrid IT environment using a variety of sensors, including:

With the new PNS, Qualys customers are gaining the ability to discover in real time all devices connecting to their network, including those which would otherwise remain invisible.

These assets can be anything: a managed corporate-owned device, an employee’s device connected to corporate networks, an IoT device such as a Wi-Fi enabled TV or IP camera. “Today, most of IT is blind to this,” he said. 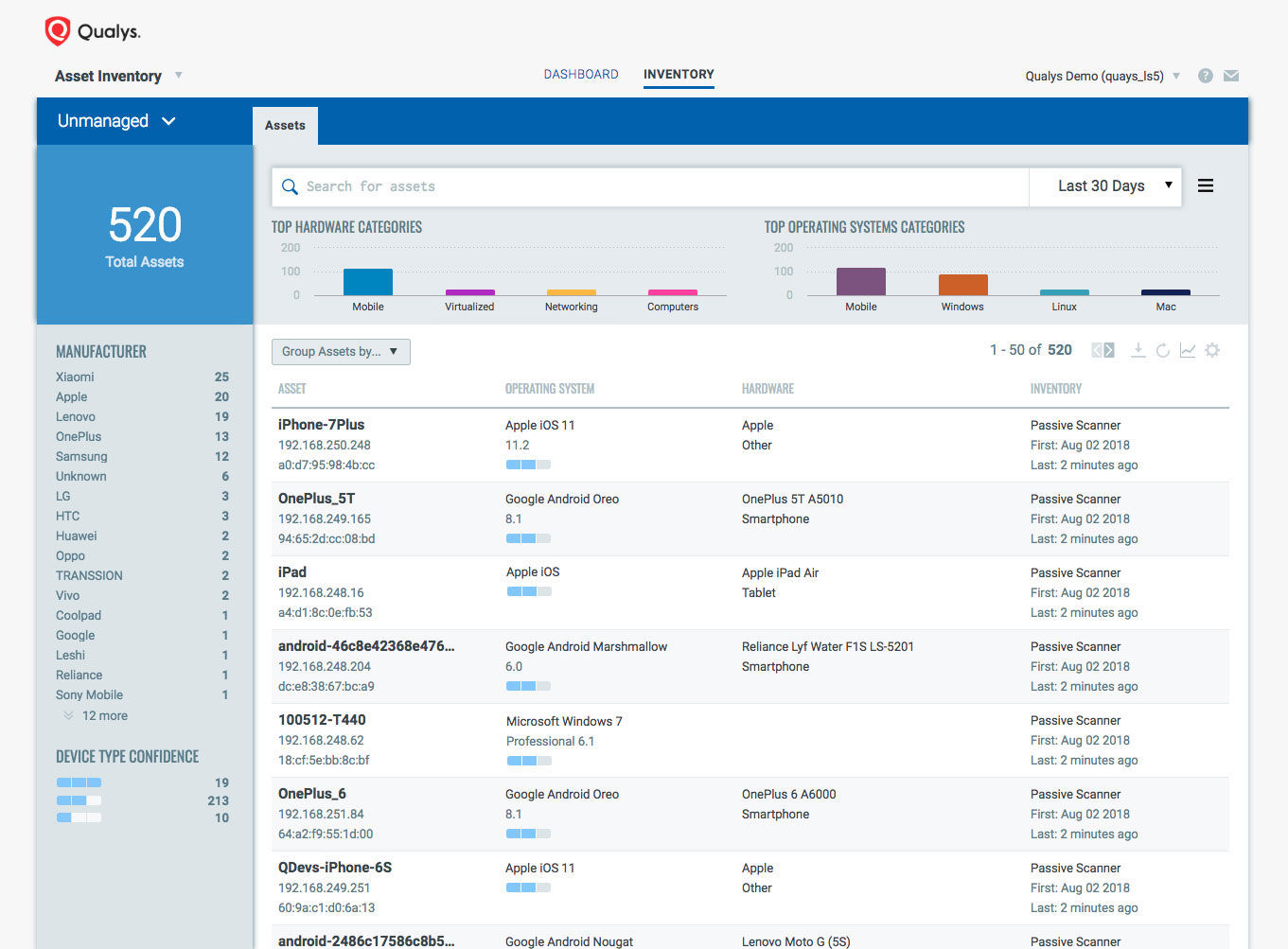 Once identified and profiled, these systems can then be managed as part the customer’s security and compliance program by scanning them or placing an agent in them. The PNS also analyzes device traffic, so it’s able to identify suspicious behavior, unauthorized communications, and other anomalous signs of compromise.

Later this year, the product will also enable network access control capabilities, so that it can be used to quarantine and block devices based on pre-established policies. “This is really bringing a whole new aspect of security and compliance to the Qualys Cloud Platform,” Thakar said.

The data collected by PNS and the other sensors is transmitted to the Qualys Cloud Platform’s backend for storage and analysis using “big data” technology, like Kafka, Elasticsearch and Cassandra.

The security and compliance data is then made available to Qualys’ over 15 integrated, self-updating apps. Accessible from a central console, the apps provide specific views and analysis of the data, Thakar explained.

As such, this growing apps suite provides a unified toolset for multiple security teams, including those in charge of on prem data centers, endpoints, clouds, web apps, DevOps pipelines and policy compliance. In this way, Qualys helps customers simplify and consolidate their security and compliance stack for hybrid IT environments.

The solution for protecting hybrid IT environments that are powering digital transformation efforts isn’t to pile on disjointed, point products, each with its own console, agent and scanner, and then slap a SIEM on top of it. “We’re helping you consolidate multiple different products that you otherwise would have to deploy in silos,” Thakar said.

With Qualys, “you can click and find all this information together in one place,” he added.

Passive Network Sensor will be available in private beta later this month. This first phase delivers capabilities focused on asset discovery and profiling. General availability is planned for early 2019.

Press release: Qualys Takes Its Cloud Platform to the Next Level with Native Integration of Real-Time Network Analysis