Why is BlueKeep So Critical?

The BlueKeep vulnerability announced earlier in 2019 allows attackers to run arbitrary program code on victims’ computers. The vulnerability is found in Remote Desktop Services – formerly known as Terminal Services – which affects some older versions of Windows. The Remote Desktop Protocol (RDP) itself is not vulnerable. This vulnerability is pre-authentication and requires no user interaction which makes it capable to widespread attacks because attackers can use automated tools for attacks as this vulnerability is “wormable.”  This means an attack could spread itself automatically across networks without any intervention by users, just as the WannaCry and Conficker worms have spread in the past.

Microsoft assigned it the highest severity level of Critical in its published guidance for customers, and in the US government’s National Vulnerability Database, the entry for CVE-2019-0708 is scored as 9.8 out of 10. Microsoft issued a blog post strongly recommending that users install its patches, including on those famous out-of-support operating systems such as Windows XP and Windows Server 2003.

The following workarounds may be helpful but in all cases, Microsoft strongly recommends that you install the updates for this vulnerability as soon as possible even if you plan to leave these workarounds in place: 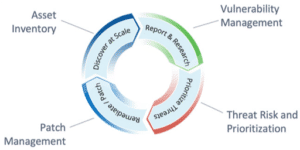 The Qualys Cloud Platform enables you to continuously monitor for vulnerabilities and misconfigurations and get alerted for your most critical assets. Qualys signature and visualization team have teamed up and included an in-product BlueKeep dashboard for easy tracking and remediation. This dashboard has been included in Qualys Cloud Platform release 2.42 and can be found within the Dashboard templates library. It will automatically show your systems whether scanned internally, externally or on remote mobile computers with the groundbreaking Qualys Cloud Agent. 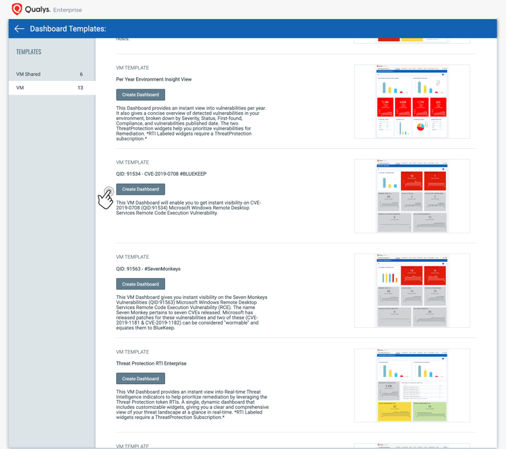 The dashboard toolbox in Qualys Community has additional dashboards created by your SMEs and Product Management team that you can import into your subscription. 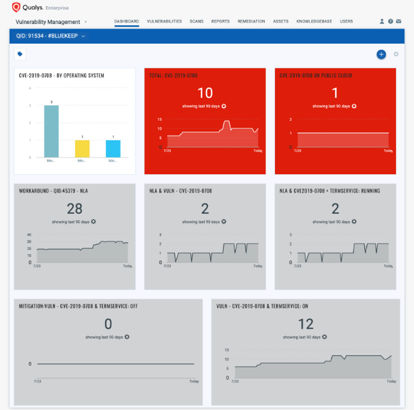 Customers using Qualys Patch Management with Cloud Agent can search for cve:`CVE-2019-0708` in the Patch Catalog, and click “Missing” in the side panel to locate and deploy patches to all affected Operating Systems, including Windows XP and Server 2003.

For emergency patching, you can create an on-demand job and target it at the “Cloud Agent” tag to cover all hosts. For continuous patching, a daily job can be created with a 24-hour “patch window” to ensure all hosts will continue to receive the required patches. This patch does require a reboot.

Targeting specific operating systems is not necessary. The Qualys Cloud Agent already knows which patch is needed for each host.

We should always keep in mind that adversaries don’t have to be extremely skilled in finding vulnerable systems. There are tons of scripts, tools and online search engines that can help narrow down and identify systems for reconnaissance and further the Cyber Kill Chain steps for exploitation.

To start detecting and remediating this vulnerability now, sign up for a Qualys Suite trial.