Vulnerabilities potentially impacting all major processor vendors were disclosed today by Google Project Zero. These vulnerabilities have been named Meltdown (CVE-2017-5754) and Spectre (CVE-2017-5753 & CVE-2017-5715). Organizations should inventory their systems by processor type, apply vendor patches as they become available, and track their progress. This article describes how Qualys can help in all three areas.

Meltdown allows any application to access all system memory, including memory allocated for the kernel. Mitigation for this vulnerability will require operating system patches and potentially firmware updates. Patches for this vulnerability may have a performance impact on systems. So far, only Intel chips and one ARM processor have been shown to be vulnerable. ARM has also discovered another variant (3a), which is similar to Meltdown and impacts several more of their processors.

Spectre allows an application to force another application to access arbitrary portions of its memory, which can then be read through a side channel. This vulnerability will require microcode updates in order to fully mitigate, in addition to software patches. According to Google Project Zero, this vulnerability impacts Intel, AMD, and ARM chips.

Microsoft has issued patches for all supported versions of Windows. Microsoft has also issued a guidance document for mitigations on client devices, and another for Windows servers. Please note that the patches released by Microsoft may be incompatible with certain antivirus software.

Microcode updates have been released by Intel to mitigate Spectre, and several Linux distributions have packaged the microcode in standard OS patches. It is not yet known if Microsoft will release microcode updates via Windows Update. Hardware vendors are expected to release the new microcode in the form of BIOS updates.

MacOS 10.13.2 mitigates some of the disclosed vulnerabilities, but MacOS 10.13.3 will enhance or complete these mitigations.

Qualys has released several QIDs that detect missing patches for these vulnerabilities across several operating systems. A list of currently-released QIDs is being maintained in this Qualys Support article. The QIDs are supported by both authenticated scanning and the Qualys Cloud Agent.

To determine processor type, you can search the results of these QIDs:

The Qualys Cloud Agent can be used to determine processor types by searching with AssetView on the processors.description field like this:

The results can also be grouped by processor type: 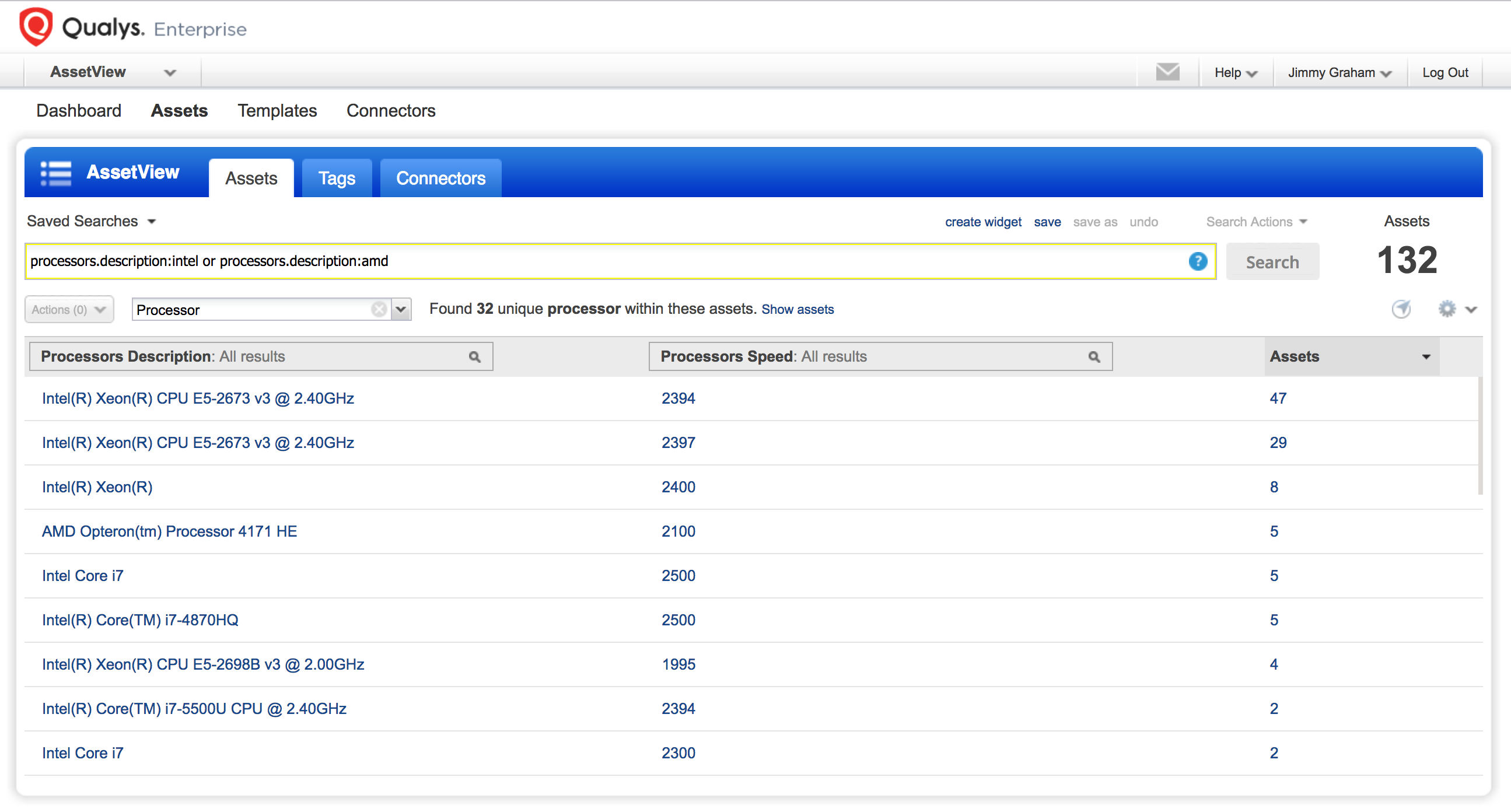