In a perfect world, organizations would patch vulnerabilities immediately after they’re disclosed, preemptively blocking exploits and dodging most cyber attacks.

We all know it’s impossible to patch every single vulnerability. Thousands are disclosed every year, and patching systems can be complicated, time-consuming and inconvenient. But InfoSec teams agree that fixing the most dangerous bugs on a timely basis is not only doable but also necessary.

The problem is that prioritizing remediation and pinpointing those critical vulnerabilities is difficult when — as is often the case — organizations lack continuous and automated vulnerability management, asset inventorying and threat analysis.

Unsurprisingly, recent Qualys data on patching behavior shows that remediation activity is directly related to the level of risk attached to specific vulnerabilities. And in some cases, specifically when it comes to the realm of IoT devices, patching is always slow, and often non-existent.

What WannaCry taught us

As featured in Cisco’s 2018 Annual Cybersecurity Report, published last week, Qualys’ data on patch management behavior before and after the WannaCry campaign is very illuminating.

The WannaCry ransomware, which infected 300,000-plus systems and disrupted critical operations globally in May, spread using the EternalBlue exploit for a Windows vulnerability (MS17-010) Microsoft had patched in March.

Qualys data shows that between mid-March, when the vulnerability in the Windows SMB Server is disclosed, and mid-April, detection of affected devices spikes and gradually declines “as organizations scan their systems and apply the patch,” the report reads.

However, the number of vulnerable systems shoots up after April 14, when the ShadowBrokers hacker group released the EternalBlue exploit. In fact, the number of impacted devices detected with the vulnerability nearly doubled in the ensuing days. 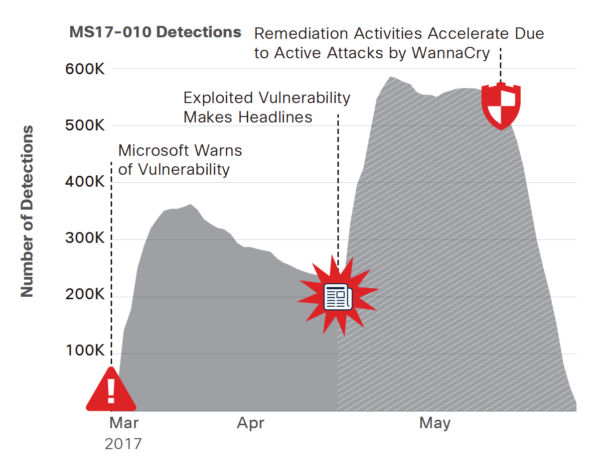 “That happened as organizations learned of the exploit and its potential to impact both supported and unsupported versions of Windows through a remote check from Qualys that used a portion of the exploit code,” the report reads.

However, widespread patching didn’t fully kick in until after the WannaCry attacks began in mid-May.

“Qualys’ research into its customers’ patching behavior indicates that it takes a major event to motivate many organizations to patch critical vulnerabilities — even knowledge of an active exploit is not enough to accelerate remediation,” the report reads.

With a patch available since mid-March — two months before the ransomware attacks — organizations had plenty of time to fix their affected systems. Had a majority of organizations done so, WannaCry would have been a minor event, instead of the global cyber disaster that it turned into. 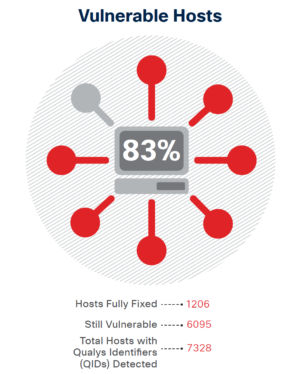 Qualys also looked at patching trends for IoT devices, and the findings were alarming.

Qualys sampled HVAC systems, door locks, fire alarm panels, card readers and other IoT devices vulnerable to several known threats, and found that only 17% of the devices had been patched, a staggeringly low number.

Among the possible reasons for the dismal percentage of patched systems are:

Also of concern is the low visibility of IoT devices, caused by organizations’ ignorance about their presence in the network. “That lack of visibility puts them at serious risk of compromise,” reads the report.

To address this visibility issue, organizations must first inventory all IoT devices on the network, and then assess which ones can be scanned and patched, and which employees use them.

Hackers are upping their game

The need for foundational InfoSec practices, such as comprehensive IT asset visibility, continuous vulnerability management, precise threat prioritization, and automated patch management, has never been higher.

Based on research and insights from researchers from Cisco and its partners, including Qualys, the report centers around three main findings:

(Jimmy Graham is a Director of Product Management at Qualys)